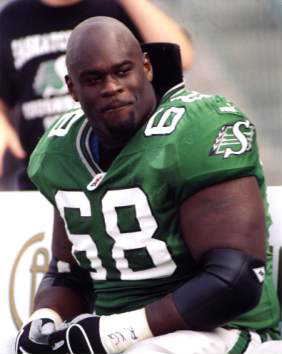 Andrew Greene was born in Kingston, Jamaica. He moved to Scarborough, Ontario at the age of 12. Andrew began his football career at Pickering High School where he also lettered in basketball, rugby and track and field. After high school, Andrew accepted a football scholarship to Indiana University Bloomington (Hoosiers). He was a four year letterman and a three year starter, twice named “Indiana’s Outstanding Offensive Lineman”. In his senior year, Andrew was named to the first team All-Big Ten Conference and second team All-American. The Hoosiers played in the Peach, Copper and Independence Bowls; Greene also played in the East-West Shrine and Senior Bowls. Andrew was selected by the Miami Dolphins in the 2nd round of the 1995 NFL Draft and also played for the Seattle Seahawks and Jacksonville Jaguars before joining the CFL Saskatchewan Roughriders in 1997. He was a part of the Roughriders playoff run and became a permanent member of the team in 1999. Greene appeared in 116 regular season games, nine playoff games and one Grey Cup before signing as a free agent with the Winnipeg Blue Bombers in 2007, where he started all 18 games for them. Andrew played for the Bombers in the 95th Grey Cup and in September of 2008 he signed with the Toronto Argonauts and became the oldest active player in the CFL. He was released from the Argonauts in January 2009 and again signed with the Saskatchewan Roughriders in May of the same year after which he promptly announced his retirement showing his desire to retire as a Saskatchewan Roughrider. In his 11 year CFL career, Andrew started in 146 games, 2 Grey Cups and was a 5 time Western Division All-star, 4 time CFL All-star, and named Western Division Outstanding Lineman in 2000 and 2003 as well as receiving the CFL award for Most Outstanding Lineman in 2003. Greene was named to the first team All Era All-Star of 1990-2009 and also in the Saskatchewan Roughriders 100th Anniversary, was voted #49 of the top 100 Riders of all time. He was inducted into the Saskatchewan Roughrider Plaza of Honor in 2012.

Greene was a dedicated, hardworking and proud member of the Saskatchewan Roughrider team. He loves to talk football and give back to the community and sport that means so much to him.