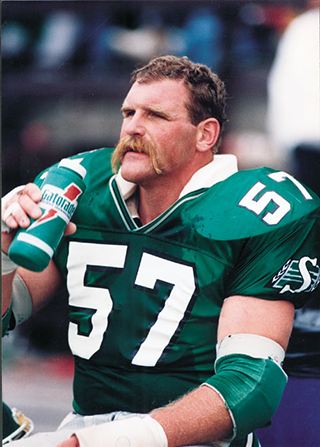 Robert “Pole Cat” Poley was born in Saskatoon, Saskatchewan and is a former professional Canadian Football Offensive Lineman, who played 15 seasons in the CFL. Bob came out of the highly successful Regina Rams Junior Football program and signed with the Saskatchewan Roughriders just prior to the 1978 season. He played seven seasons with the Riders before being traded to the Calgary Stampeders where he played for three years, winning West and CFL All-Stars at Center in 1986. Poley was named the Outstanding Offensive lineman in the West in 1987 and was a finalist for the CFL’s Outstanding Lineman Award. He was released by Calgary in September of 1988 and signed back with the Roughriders where he completed his career as a member of the 1989 Grey Cup team. Poley’s 183 games played as a Saskatchewan Roughrider ranks him 13th on the Riders’ All-Time games played list. He also ranks 21st on the CFL’s All-Time games played list with 236 and ranks 7th amongst games played by offensive linesman.

Since his retirement, Bob writes a column for Saskatchewan Tourism called the “Tackle Box” with a former teammate and is very involved in fundraising activities for Ducks unlimited. The “Polecat” is truly a Roughrider Legend!