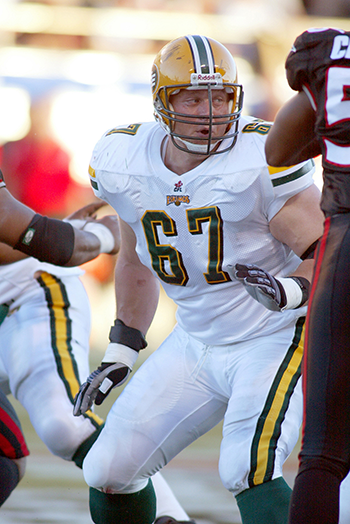 Dan Comiskey played football in the Canadian Football League for 13 years, where he was coached by over 40 different professional coaches. All of these coaches were behaviour change specialists, and helped Dan become an expert in the fundamentals of habit change.

Dan retired from the Canadian Football League in 2010 where he was a perennial all-star and a two time Grey Cup champion. Dan has co-written “The Truth About Success”, “Enduring Principles of Leadership”, “My Rules”, and “Professional Coaching”. Dan has spent the last 5 years working in Heavy oil as a behavioural safety specialist. He is passionate about injury prevention and safety awareness.

Since his retirement from the Canadian Football League in 2010 Dan has dedicated his time working for heavy oil in northern Alberta. This career path lead to a position in behavioral safety and has allowed Dan to further his work Safety Culture. Throughout his work on his last project, the team had a combined 2.7 million man hours with no loss time incidents. As a startup project in the northern part of Alberta this was a point of pride for everyone involved.

Dan has a very personal perspective on the importance of safe production.

Through his football career Dan suffered multiple concussions, a ruptured triceps, a torn calf, and a broken leg, all in the last 5 years. Dan’s step-brother was lost while working as a power lineman in Ontario. This was a turning point as Dan began to grasp the importance of intervention and lead Dan to career in Safety.

Dan has spent his entire career honing his skills as a philanthropist and public speaker. He has been the honourable Chairperson for both the Canadian Cancer Society and the Kidney Foundation of Canada. He has spearheaded numerous Charity Drives for these organizations, as well as for the Children’s Wish Foundation of Canada. For his work in the community, Dan has been honoured twice with the CFL’s Tom Pate nomination. This prestigious award is given for the unique combination of outstanding sportsmanship and dedication to the league and community.

Dan’s involvement as a leader both in football and heavy oil has established him as a sought after speaker.

Dan Comiskey, as a leader and as a Member of a Grey Cup winning team learned many lessons that can be applied to the workplace and at home.

EVERY “ONE” THING is a creative, humorous and inspirational keynote address.

Dan draws you into his world of sports and family and shares the high and low points that were created by the many individual choices that he made.

Dan will discuss how small initial decisions lead to large unforeseen consequences over time for ourselves and the world around us. Incremental improvements become habit forming. All of these choices affect more than just us… Our choices affect our families, friends and thousands of people whom we don’t even know.

We choose to succeed or to fail in every situation in life. The choice is ours. All we need to succeed is within our grasp. There are only four essential elements to success:

1) Having a crystal clear vision,

2) Engaging ourselves through healthy self-talk,

3) Accepting our mistakes – not repeating them, and

4) Keeping a courageous positive attitude – The big question… can I survive?

This applies to EVERY “ONE” THING. It pertains to the lot of what we do and choose to do: from safety in the workplace, to leadership in the office, and to success or failure in our personal lives.

EVERY “ONE” THING will motivate audience members to strive for more and reach their potential. The audience will leave with an understanding of just how important their decisions and actions are to their lives, and to the world.

“Our supervisors were emotionally affected. Dan changed their perspective on coaching safety.”

“Dan is a powerful speaker. He also has a clear and powerful message. Absolutely outstanding.”

“Dan was a team leader with our organization for years. He never had any trouble speaking from the front of the room when the need presented itself. He was also a terrific speaker at our corporate breakfasts. I highly recommend Dan as a speaker.”

“Our foremen were very impressed with Dan’s coaching message. Dan is a riveting speaker, and is clearly passionate about safety.”

“Dan is a passionate speaker who puts his heart and soul into his presentation. He really cares about people and their welfare, and that comes through loud and clear in his powerful presentation.”

“Dan I would like to thank you for the very moving presentation you put on at Shell Albian Sands. It was very hard to hold back tears in a room full of big tough construction workers. Your passion is very needed in our profession and I think you hit home to a lot of people. My crews were very thankful to sit in on your session also. Keep up the good work. I tried to shake your hand but the line was crowd was too large to get close.”