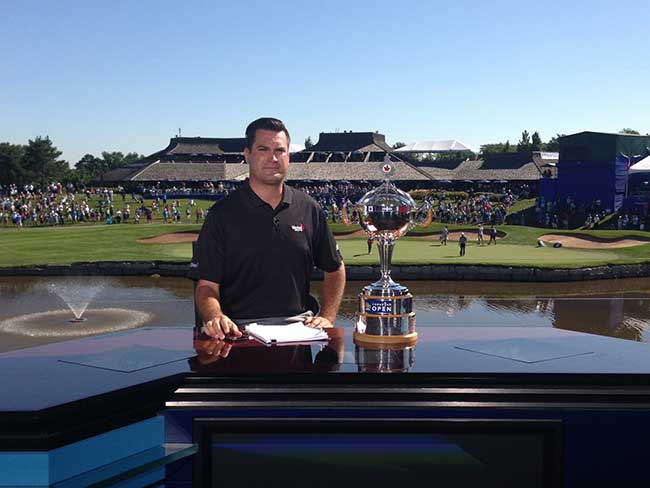 Derek Meyers is “that Sports guy.” He has been bringing his wildly entertaining and informative style to the Global Regina air waves for nearly five years. Life is fun when you are doing what you love and Derek sure has fun.

He was raised on a farm north of Midale, Sk. and Sports have been a big part this small town kid’s life from the get go. Name a sports and likely Derek has been in attendance to watch it Live. UEFA Champions league soccer, NFL, NHL, PGA Championships, the Olympics and MLB games.

Derek began his career as a geologist and worked for six years before going back to school to study television in 2005 at NAIT. He spent 14 months at CJDC in Dawson Creek, British Columbia, before migrating back to Saskatchewan and joining Global Regina’s news team.

Derek loves to get involved with the community, taking part in fundraising and charity runs, emceeing and meeting new people. Whether it be emceeing the Cystic Fibrosis Ladies night for 400 women, the Run for a Cure event for thousands or talking about his career in front of 15 students…Derek is engaging and exciting. There is no question that every event he attends, Derek helps make it a memorable time for everyone.

Public speaking is a favourite of Derek’s…well, just speaking in general is not just a job but a passion. Since Grade 6, at 11 year old, when he did a class presentation on the Assassination of John F. Kennedy, Derek has loved an audience. He can speak on a variety of topics to any age group. It’s his ability to relate to people from 3 to 83 that makes him unique. Life experience a plenty…. Derek likes talking about team concepts, new social media and its capabilities as well as “Chasing after your dreams”, a decision Derek made in his late 20’s.

In his spare time Derek likes to run, golf and spend time with his two children Teigha and Dayn. He would love to put his love for public speaking and community together and be an entertaining part of your next event.

“I would highly recommend Derek Myers for your event. Our experience is that he is well prepared, engaging and has a great sense of humour that works with any audience”.

“Derek Myers of Global Television has been a guest speaker in my grade nine English classroom the past two years and has been sensational. Very informative and kid friendly. He has already agreed to speak again in the Fall of 2013. I have really appreciated his insight from a media perspective and helping to answer media related questions from my students.”