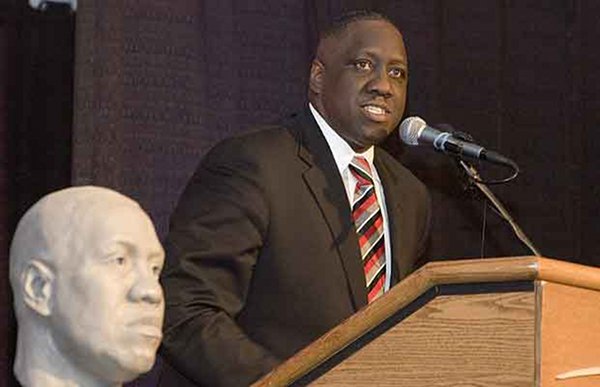 Canadian Football Hall of Famer Don Narcisse brings a bold, dynamic and passionate message to the podium when he speaks. Don draws on his all-star accomplishments as an athlete and community leader to share messages of leadership, teamwork, motivation, and determination.

Don, born in Port Arthur, Texas, is a lively, passionate and engaging speaker who tailors his presentations to inspire, inform and most importantly entertain.

The Texas Southern University graduate was a four time CFL all-star and a member of the Saskatchewan Roughriders 1989 Grey Cup Championship team. In addition to his many college receiving records, Don set a CFL record for the most consecutive CFL games (216) with a pass reception.

During his keynote message, Don discusses how his upbringing helped to shape his positive character and through much perseverance reached his goal of playing professional football. His special message can be transformed to meet the needs of any industry.

Known for his tireless community involvement through his youth football camps and Kid’s Sport fundraising initiatives, Don believes in giving back to those who have supported him.

You will enjoy listening to Don share his past experiences and CFL locker room stories that highlight his journey to success in a entertaining, captivating and empowering way.

“Don was an absolute pleasure to work with! I received a wonderful testimonial about Don from St. Paul’s Hospital Foundation Member, Bruce Acton: “I was particularly impressed by Don Narcisse and his willingness to speak so personally about his prostate cancer journey.” I couldn’t agree more! You could hear a pin drop in the room while he spoke! He was so warm and open about his experience and just a very genuine person. He has also followed up with me since the event and offered to put together a collage from his photos at the Meet & Greet!”

“Narco was a little more serious , he obviously loves people and really appreciates what he has been given. He had a very nice speech for the kids at the rink ending with always listen to your parents. He must of signed 500 autographs that day , even when we got to the hall he went around and signed a lot of the programs we had sitting on the tables. His speech at the hall was very interesting in how he overcame a lot to reach his goal. Narco sat at the western sales table and just had great time with him buying his jersey for 1900.00. The next morning I heard that he emailed all the people at his table and thanked them for letting him sit with them.”

“Don Narcisse was one of our special guest speakers. He spoke from the heart and gave everyone there a personal insight into what it takes to be a professional athlete, even if your mother wants you to play the trumpet!”

“Don has the rare ability to draw an audience with his legendary status as one of Saskatchewan’s greatest sports heroes, but it is the power of true sincerity and humility which keeps the audience riveted to every word. Don’s message of the importance of faith, family and community gave the young men and women in the audience the strength of conviction and the desire to be the very best that they can be. We would be honoured to have Don speak to our membership and our youth again in the future.”

“Serious. Humorous. Thought provoking. Sincere. Humble. But most of all, inspiring. You get the entire package with Mr. Don Narcisse. Mr. Narcisse was one of the featured speakers at our 2012 Fundraising Dinner and there were times during his address you could have heard a pin drop. His speech appealed to all in attendance from our young football players to our older supporters.

Perhaps the message that stuck the most to those of us involved in football was “Hard work beats talent when talent doesn’t work hard.” I think that’s a great message that we can pass on to our youth. It was fascinating to hear his story from his football beginnings to how he returned to Saskatchewan, back to the fans that clearly embrace him. There is no question that Mr. Narcisse’s message came from the heart. And one of the most riveting parts of his address came when he called up three of our football players alongside him on stage and shared some words of wisdom.

I highly recommend Mr. Don Narcisse as a speaker for any event. I feel honored that we had the opportunity to have him at our Fundraising Dinner”.

“Don stole the show! He included the Lumsden Football players in his messages by bringing them up on the stage, he engaged the audience, was funny, motivating and real! It was one of the best speakers I have heard as he took the time to gage his crowd, include others, share his story and made us all believe we can do the impossible. He was loved by all!”

“Thank you so much for allowing us to have such as great speaker!”

“Mr. Narcisse was featured as a special guest at the Saskatchewan Public Works Association conference and asked to be available for picture taking, autographs and to mingle with the attendees. He was originally asked to attend on the Tuesday night of our show but because a lot of the delegates weren’t in attendance, he offered to come back the following evening as well. His attendance the following night was not at all expected so to have him come back was a surprise and greatly appreciated. It was a pleasure to have met him and the delegates enjoyed the opportunity, he did a terrific job. He was very friendly and very personable, what a great guy!”

“Don Narcisse was amazing. His presentation (c. one hour – without notes) had people alternately laughing and crying as he shared his story. The crowd was truly appreciative of his openness and humour (we were even treated to the Narco Shuffle). Those of us who have participated in all five sports dinners and auctions agreed he was one of the top speakers we’ve had; if not the top. We would highly recommend him for any others wanting a first class person to give a first class presentation.”

“Don attended our year end Awards banquet for the Moosomin Generals Football Club on the evening of November 17. It was a fantastic experience having Don be there to tell his story on making it to where he is today. Some of his messages about working hard never giving up and believing in yourself really hit home with some of the kids in our program. Don interaction with the players was great, he called 4 different individuals up and presented each one with a ring (grey cup, hall of fame, plaza of honor) he let the players take these back to their seats and show them off. All were returned at the end of the night. He got all the players to get up and dance and have a good time while taking selfies and videos which he has since shared to our Facebook page. And to the request of many parents it did not take much convincing for don to show off his famous TD Dance. Before the night was over I’m pretty sure don posed for over 300 photos and signed over 200 autographs. All in all it was a fantastic evening Don is a wonderful speaker and shares a great story we are hoping to have him back for future events maybe even one of his football camps.

Thank you to Joe Gunnis and the EMJ group for hooking us up with a great speaker and person.”