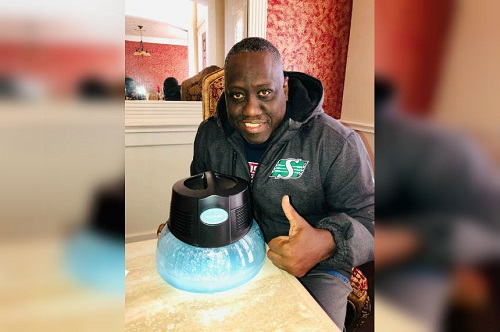 Hard work helped Don Narcisse go from the B team of his high school squad to becoming one of the greatest wide receivers ever to play in the CFL.

“I tell kids these days — I have this quote I always say — ‘Hard work beats talent when talent never works hard.’ You don’t have to be the best player on the football team. As long as you go out there and do all the small things, it’s just amazing what can happen,” the Saskatchewan Roughriders great said.

Narcisse reached the peak in 1989 as a member of the Grey Cup-winning Roughriders team, but it was a long road to get there.

Narcisse was born in Port Arthur, Texas and wanted to play football all his life. But at seven years old, he was diagnosed with asthma.

“I still remember the day that I had went to the hospital and my mom was just looking at me. They had this mask over my face and I’m looking at my mom and she was crying. She felt like, ‘I wish that was me instead of my son going through this,’ ” Narcisse said.

But Narcisse said dealing with asthma helped instil an attitude in him to always work hard.

“Once I stopped (running), that’s when the asthma would kick back in and I can’t breathe and I’d have to start all over again so that’s why I’d run all day,” Narcisse said. “Even if I wasn’t running fast but I was able to (push through) and keep running, I think that empowered me to say never give up. And that was all my life: I never gave up.”

After his mom, Dorothy, saw her son like that, she told him he couldn’t play sports and wanted him to try out for the school marching band.

Narcisse made his high school’s B team and wouldn’t get a chance to start until his senior year.

“My first game I was No. 8 on the depth chart. The third game of the season, I was 1-A,” Narcisse said. “I got a chance to play at Texas Southern as a starter for the next three years. My senior year, I led the nation — I caught 88 passes for 1,074 yards and 15 touchdowns.”

During his time at university, his mom sent him $20 every month and he had to find a way to live off of that.

Harold Smith, then a Roughriders quarterback, was a Texas Southern alumnus. He was speaking to the players one day and told Narcisse about a tryout in Shreveport, La.

“So I made it to the hotel and I’m hanging with Harold, the coaches already had a hotel for him, and they had no idea who I was. They thought I was (Smith’s) little brother,” Narcisse said.

At the tryout, Narcisse caught the attention of the coaching staff in a big way.

“There were 400 guys out there trying out,” he said. “It was a two-day camp. After two days, they only wanted to sign four guys and I was one of the guys they wanted to sign.”

He also tried out for the then-St. Louis Cardinals of the NFL and was one of the last cuts there. The Roughriders reached out to the Cardinals wanting to talk to Narcisse and then, after a short phone call, he was on a flight to Saskatchewan to play with the Roughriders in 1987.

“I went into the locker room and they cut the player who was wearing No. 80, and gave me No. 80 and it was history after that,” Narcisse said.

And history it was.

Narcisse went on to catch 919 passes for the Green and White for 12,366 yards and 75 touchdowns. He was inducted into the Roughriders’ Plaza of Honour in 2003 and the Canadian Football Hall of Fame in 2010.

He caught a pass in all 216 regular-season games he played with the Roughriders. When he was going to break the CFL record for most consecutive games with a catch, he was surprised to see it was a record.

Narcisse also had his own touchdown dance that become popular – the Narco Strut.

“I did it in fun but I used to practise in the mirror,” he said. “I still do it every once in a while. I work out kids and stuff and I still do my little dance there.

“I made sure that I didn’t make fun of anybody while doing it but guys on the other team would be like, ‘Don’t let him do that dance.’ “

In 1989, the Roughriders found themselves on top of the CFL landscape for just the second time in team history, beating the Hamilton Tiger-Cats 43-40 in Toronto on Nov. 26.

“That season was a great season for us. We all played an integral part in the game. You’re looking at the playoffs and we didn’t have all our receivers. It was just guys stepping up, guys you hadn’t seen or heard of, but they’re making plays and that’s what a team is all about,” Narcisse said.

“It’s amazing because you never know when you’re going to get that opportunity again. I got a chance to drink out of the cup. I’ll never do that again; (there have been) too many people drinking out of that cup. But it was the best time I ever had because I only one won Grey Cup.”

Narcisse retired in 1999 and remembers the team sent him and his family on a vacation to Mexico as a thank you.

“When you play this football game, it’s like you block everything out because you’ve got to have football on your mind at all times because that game can be taken away from you and there’s a lot of things I had to put aside. When I got to spend time with my family, it was worth everything that I did,” Narcisse said.

After retiring, Narcisse spent many years in Regina and was prominent in providing football camps for kids in the province.

“People never thought I would be where I’m at today so I always want to give a kid an opportunity and the message that just because you’re not the fastest, you’re not the strongest, that doesn’t mean this can’t happen to you,” Narcisse said.

In 2018, Narcisse was diagnosed with prostate cancer and moved home to Texas. He needed to undergo 39 days of treatment. His last treatment was in July 2019 and he is now cancer free,

“I had so many people that were on my side. When I first found out that I had it, my sister came over to the house and coached me up and said, ‘Hey, you need to use your platform and let people know what’s going on with you,’ and I posted it on Facebook and it was thousands of people hitting me up on Facebook,” Narcisse said.

“It doesn’t matter what stage it is, if you have cancer, you have cancer and then you have to deal with it and that’s the key with dealing with it. If you keep it inside, that’s going to eat you up. You’re going to be like, ‘I don’t want nobody to know what I’ve got going on,’ and it gets uncontrollable.”

As he looks back on his career as a member of the Roughriders, he said it’s unbelievable what took place.

“Sometimes I have to pinch myself to see if it was a dream,” Narcisse said. “I am so glad that I got a chance to play for the Saskatchewan Roughriders. It’s the best thing that ever happened to me in my life. I would not have taken it back for anything. The friends, the fans, the family — it’s just amazing.”