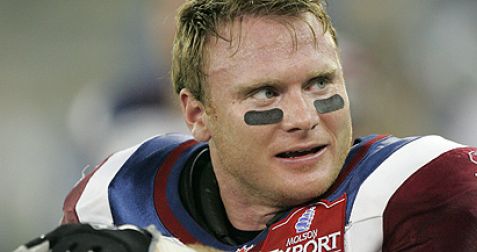 A native of Brossard, Quebec, Eric Lapointe played his college at Mount Allison University. During Eric’s college career he was Canada’s Rookie of the Year, a three-time All- Canadian, and a two-time Hec Crighton Trophy winner as Most Outstanding Player in Canada (1996 and 1998). Eric rushed for a total 4,666 yards and 31 touchdowns during his 4 years at Mount Allison University …

After graduation in 1999, Lapointe was selected in the third round (20th overall) of the CFL entry draft by the Edmonton Eskimos. In 1999 Eric played on the Hamilton Tiger-Cats Grey Cup winning team.

He joined the Montreal Alouettes in February 2001. In 2005 Eric was the starting running back for the Alouettes in the 93rd Grey Cup.

Eric will be inducted into the CFL Hall of Fame this year. Eric is currently a financial analyst in Montreal.