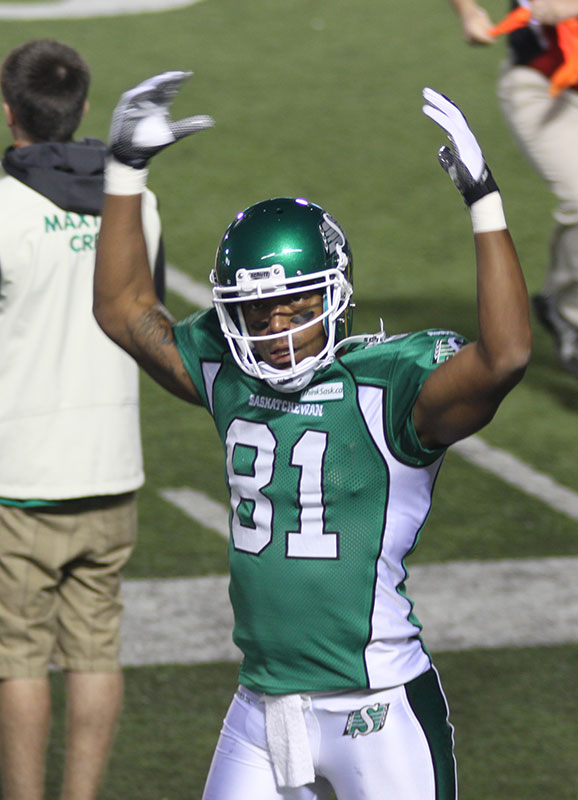 Geroy Simon, born in Johnstown, Pennsylvania, is currently a slot back in the Canadian Football League with the Saskatchewan Roughriders. Geroy began his football career with the University of Maryland where he finished second on the University’s all-time charts for receptions. In his sophomore year, he set an ACC record with 77 catches for 891 yards and 5 touchdowns. In 1997 Geroy spent time on the practice roster with the Pittsburgh Steelers before becoming a member of the CFL’s Winnipeg Blue Bombers, playing in 10 games in the 1999 season and all 18 regular season games in 2000.

In 2001 Geroy joined the BC Lions as a free agent and served as a backup at the slot back position but this was just the beginning of a 12 year legacy with the BC Lions. 2002 was Geroy’s first full season in the starting line-up and he led the Lions with 50 receptions and 754 yards. He recorded his first 1,000 yard season in 2003 with 1687 yards and was named both a Western and CFL All-Star. Simon became the third Lion player to record 100 receptions in his 2004 season. He also broke the BC Lions team record for single season receiving with 1,750 yards and caught 3 passes for 31 yards in the 2004 Grey Cup. Geroy also received his second straight Western and CFL All-Star berth. In 2005 Geroy led the Lions in receiving (both yards and receptions) for the third straight season. He ranked 4th in the CFL in receiving yards with 1,322 and 5th in receptions with 89. Simon also set an all-time Lions playoff record with a 90-yard reception for a TD vs. Edmonton in the 2005 West Final. He again led the CFL in receiving yards and receptions in 2006 reaching a career high and breaking his own team receiving yards record from 2004. He also tied the CFL record for most 100 yard receiving games in a season (11). Simon was named the Most Outstanding Player of the CFL for 2006 and capped off the season with four catches for 41 yards in the BC Lions 2006 Grey Cup win. 2007 was a personal best as Simon reached 18.2 yard average per catch and claimed his second straight receiving title with a 211 yard performance in the final game of the season. In July of 2008 Geroy claimed the number one spot as the Lions all-time receiving yards receiver. He finished the season with a career 10, 262 receiving yards. He also became the Lions all-time receiving touchdown leader in September of the same year. Simon faced double and triple coverage in 2009 which reduced his receptions but he still reached his seventh straight 1000-yard season and it was also the seventh season in which he led the Lions in receiving yards. Geroy recorded his eighth straight 1000 yard receiving season in 2010 and in September of 2011, Simon became the Lions’ all –time touchdown leader and had an all-star season playing in the 99th Grey cup and capturing his second Grey Cup Championship. 2012 say Simon become the all-time CFL career reception yards leader.

In January of 2013, Simon was traded to the Saskatchewan Roughriders. He missed the first 3 weeks of the 2013 season with an injury but in week 8 he became the 3rd player in CFL history to have 1,000 career receptions. Just one week later, Geroy became the first CFL player to have 16,000 receiving yards. Geroy Simon is the CFL’s all time leading receiver (receptions and yards) and after catching two touchdown passes, he is a proud member of the 2013 Grey Cup Championship team.

When he is not playing football Geroy enjoys spending time with his wife Tracy and his three children, Gervon, Jaden, and Jordan. He also loves to be an active part of his community and has recently been working with a local charity to provide Coats for needy Children. Geroy also enjoys speaking to local groups on many different topics including leadership, making the right choices and goal setting.