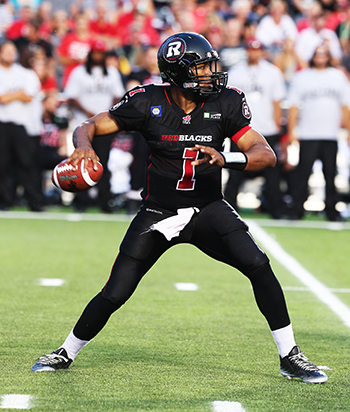 Henry Burris, born Spiro Oklahoma in June of 1975, began his athletic career early at Spiro High School where he received 4 varsity letters (football, track, basketball and baseball). In his senior year Henry was named the Oklahoma Offensive Player of the Year in Football. Burris went on to attend Temple University where he played for 4 years, setting 20 passing records including Big East Conference records for pass completions (558) and career passing attempts (1,136). Henry took Temple from last in Big East passing in 1993 to first in 1994.

Henry signed with the Canadian Football League Calgary Stampeders in 1997 and spent that year on the practice roster. He had his first playing time in 1998 and became the backup quarterback to Dave Dickenson in 1999. He replaced Dickenson in the third week against the Edmonton Eskimos and led the Stampeders to a come from behind victory! He started the following two games before being injured. He spent the remainder of the 1999 season on the 9 game injured list.

In 2000, Henry moved to the Saskatchewan Roughriders for his first chance at a starting quarterback position. He dressed for 18 games with the riders, making his debut in week one and starting games 1 through 16. Henry finished the season completing 308 of 576 passes for 4,647 yards and 30 touchdowns, running for 188 yards and eight touchdowns. He was the Roughriders nominee as Most Outstanding Player for 2000. The Green Bay Packers took interest in him after the CFL season ended, and signed him to a contract.

Henry spent the 2001 season with the Packers were he was named to the active roster at the close of training camp and spent the first 11 games of the regular season as the team’s third QB before being placed on the practice squad. In the off season, Burris was signed by the Chicago Bears. He dressed in six games with Chicago and made his first NFL start in week 16. He completed 18 of 51 passes for 207 yards and three touchdowns during the season and rushed 15 times for 104 yards. In 2003, Henry was assigned to the NFL Europe’s Berlin Thunder where he played until returning to the CFL as back-up quarterback with the Saskatchewan Roughriders. Henry suffered a knee injury and was forced to miss part of the season.

2004 brought Henry Burris back to the Saskatchewan Roughriders healthy and ready to lead his team. He finished the season completing 322 of 544 passes for 4,267 yards and 23 touchdown passes plus 464 rushing yards and 7 touchdowns. Henry recorded four games with over 350 yards passing that year and took his team to the 2004 Western Finals, where they narrowly missed a trip to the Grey cup.

2005 saw Henry return to the Calgary Stampeders where he took his team to the Western Semi finals. In 2006 he again helped the Stampeders advance to the CFL playoffs, hosting their second home playoff game but lost the Western Semi final to his former team, the Roughriders. 2007 had the Stampeders meet the same playoff fate but Henry had outstanding numbers despite missing three games to injury. He lead the CFL in touchdown passes (34), was second in passing yards with a total of 4,279 and had the best efficiency rating in the CFL.

In 2008 Burris started every game and helped guide a young Stampeder team to their first West Final and Grey Cup victories since 2001. Henry had career highs in passing attempts (591), completions (381), passing yards (5,094) and touchdowns (39). He was named the most valuable player of the Grey Cup and was a West Division All-Star. He also received the team’s Presidents Ring for the second consecutive season. Burris led the Calgary Stampeders to a second place finish in the Western Conference in 2009 but he rewrote the record books over the course of the season as he claimed first place in franchise history in all significant passing categories. Henry quarterbacked the Stampeders to a CFL best record of 13-5 in 2010, finishing first in the Western Conference and won the CFL’s Most Outstanding Player award for that season. Henry started 14 of 18 games in 2011 compiling 3687 yards and 20 touchdowns.

In January of 2012 Henry Burris was traded to the Hamilton Tiger Cats and had a career year as he threw for 5,367 yards and 43 touchdowns, with a pass rating of 104.4. On September 13, 2013, mid way through the CFL season, Henry Burris became the 5th CFL quarterback to throw for 50,000 career passing yards. His 4,925 passing yards in 2013 was enough to lead the league in passing for the second consecutive year. Burris lead the Tiger-Cats into the post-season with a record of 10-8, defeating the Montreal Alouettes and then the Toronto Argonauts but ultimately lost to the Saskatchewan Roughriders in the 101st Grey Cup game. Burris will become a Free Agent in February of 2014 but hopes to stay with the Tiger Cats.

Henry is an active member of his community and is involved with various service clubs. He is known for his contributions on and off the field and enjoys the chance to meet and speak to the fans.