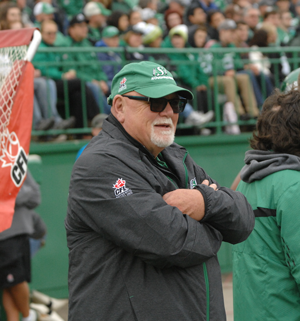 Jim Hopson has been involved with football in Saskatchewan for much of his life. He played high school football for Thom Collegiate in Regina and junior football with the Regina Rams. Jim’s professional football career began in 1973 with the Saskatchewan Roughrider Football Club. He became a starter on the offensive line for the Roughriders in 1974 and had the opportunity to play with many Roughrider greats, including Ron Lancaster and George Reed.

In 2005 Jim became the first fulltime president and CEO for the Saskatchewan Roughriders. Hopson served in this role until retiring in 2015. Under his guidance, the Roughriders made four Grey Cup appearances and captured both the 2007 and 2013 Grey Cups. Jim’s leadership helped turn the Saskatchewan Roughriders into one of the CFLs model franchises, achieving record profits and securing the funding and support for the new Mosaic Stadium.

In 2014 Jim was awarded the Hugh Campbell Distinguished Leadership Award for his contributions to the Canadian Football League, the game of football and Canada’s sporting community. In 2015, Jim was honoured to receive the Lifetime Achievement Awards from the University of Regina Alumni Association.

Jim currently chairs the University of Saskatchewan Athletics Board and sits on the boards of SaskPower and the Regina Exhibition Association.

Jim speaks on topics such as leadership, team building, managing change and building excellence. He also speaks at various fundraisers and sports dinners.

Jim’s book, Running the Riders, is available at local bookstores and all Saskatchewan Roughriders stores.