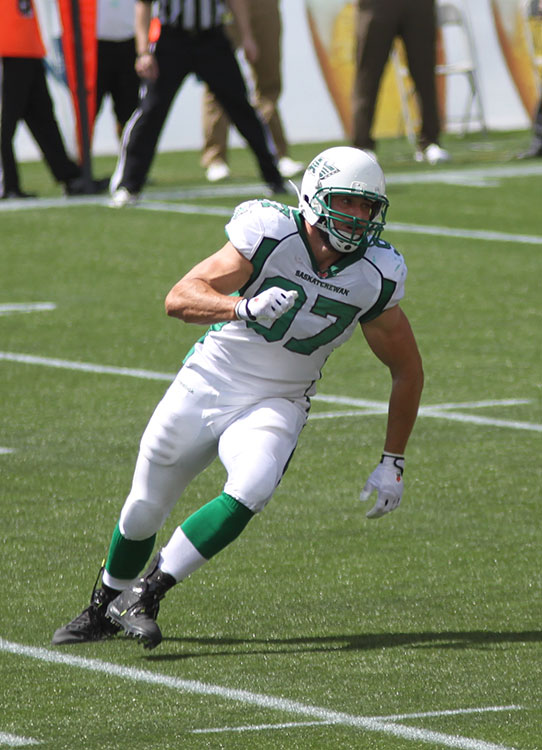 John currently plays for the Saskatchewan Roughriders and is a proud member of the 2013 Grey Cup Championship Team.

John was born in Gillette, Wyoming, where he grew up with a younger sister and brother. From a young age John had a love and talent for athletics, and by high school graduation he had found his true passion in football.

John earned a full athletic scholarship to Utah State University where he played football and was a 4 year starter for the Aggies. In 2002 he became the first USU freshman to start a season at defensive end in nine years. As a senior John was ranked 5th in the NCAA with 12.5 quarterback sacks and he was named 1st Team All Conference Defensive End for the Western Athletic Conference (Division 1A conference in the NCAA). His collegiate accomplishments earned him the opportunity to live his lifelong dream to play professional football. His first contract was with the Houston Texans of the NFL in 2006 where he attended training camp.

John then returned to the NFL in 2010 where he joined the Indianapolis Colts and played in four preseason games. He then signed with the Jacksonville Jaguars in September of 2011 where he played 11 regular season games and finished the season with eight defensive tackles and 2.5 quarterback sacks. After spending his first six weeks on the injured list, Chick played eight regular season games in 2012 with the Jaguars and finished the season with two defensive tackles.

In May of 2013, John signed with the Saskatchewan Roughriders and was welcomed back by the team and fans alike. He has again become an integral part of the team and the Riders 2013 Grey Cup Journey.

Outside of football, John is also a dedicated husband and father. He and his wife Catherine have 4 children – Camryn, Robert, Joshua, and Lucas to keep them busy.

After being diagnosed with Type 1 diabetes at the age of 14, John has always worked hard to maintain great health and accomplish his life dreams. He is also a practicing believer in Jesus Christ and deeply committed to his faith. These two attributes along with his professional successes prove him to be an extremely motivational and inspirational speaker.

John spends much of his off-season traveling the province and the country as a presenter in the Community Youth Challenge Program, a school program promoting health/wellness, drug-free and bully free environment. As an ambassador and spokesperson for the Juvenile Diabetes Research Foundation, as well as the Medtronic Diabetes of Canada, and as a member of the Saskatchewan Roughriders – John has the opportunity to participate in and speak at many local charity’s/fundraiser, school programs, business seminars, and camps. After his move to Indiana, John became involved with the Indiana chapter for the Juvenile Diabetes Research Foundation, and continued to be involved in many of the same type of community events and activities through the Colts as he had been with the Roughriders. He continues to work with Medtronic of Canada and JDRF. John looks forward to his future involvement with his local community as well as maintaining his involvement in his home state of Wyoming.

While John loves his job as a professional athlete, he also loves and has a passion for sharing his time and story with others outside the realm of football. He would love the opportunity to meet – motivate – share with – and hopefully inspire your group.