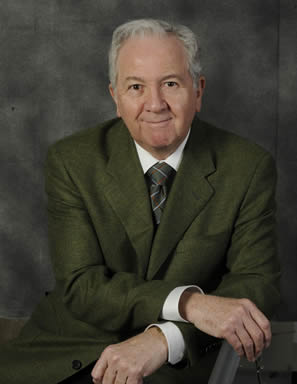 John Davidson – who came to Canada from Scotland in 1948 – knows exactly what it means in life to persevere in the face of adversity.

John has had two careers in his life. First, he enjoyed a 30-year career in broadcasting – beginning in London – and then with CBC Radio and Television in Vancouver before returning to London’s CFPL Television.

In 1995 John’s second career began when life took a dramatic turn. He would go from news reporter to newsmaker.

When tragedy struck his family with the news that his son Jesse was facing a life-threatening illness for which there is no cure – John was thrown into a nightmare that few of us could imagine or endure. He left behind the security of his job and the comfort of home – in what turned into a life changing experience. John committed himself to making a difference in the lives of children by raising funds for research.

The quest began with an incredible 3300 kilometre journey that saw him pushing his son Jesse in his wheelchair across Ontario. The adventure quickly became known as Jesse’s Journey. But this was just the beginning of the story. Driven by an inner strength and determination – and at the age of 52 – John Davidson set out to walk across Canada!

The plan called for John to spend ten months on the road walking from St. John’s, Newfoundland to Victoria, British Columbia – a distance of more than 8300 kilometres – spanning six times zones.

Jesse’s Journey – the charity the Davidson’s founded – has invested more than $3M directly into research projects in Canada and the United States. At the same time, in the years since they first took to the road, the Jesse Davidson Endowment – the engine that funds research – has grown to almost nine million dollars. Both father and son have been named to the Order of Ontario.

John Davidson continues on his quest to fine a cure that will make a difference for boys like Jesse – around the world. It is an honour and a pleasure to introduce to you – John Davidson.

“The Sunshine Foundation of Canada was thrilled to have John Davidson as the closing keynote speaker for our recent “Sunshine Summit”, a conference which brought together volunteers and partners from across Canada. John’s presentation was a great reminder to all of us that there is no mountain too big or scary to climb – we just have to choose ‘The Right Road’ “

“I always believe that we meet people in this life not by chance but by purpose…..John is one of those people!! The message of Jesse’s Journey will inspire you and create a stir deep within you to find your purpose and make a difference in the lives of others.”

“John Davidson’s inspiring presentation was the perfect ending to our Red Cross Youth Leadership Conference. As John weaved the story of his journey, we were all captivated. Between the tears and the laughter we were guided in the pursuit of our dreams. The audience was made to feel as if the presentation was done specifically for them!”

“Our members and guests were very impressed! Your presentation was extremely well done! Jesse was a remarkable young man, and his “Journey” was deeply moving. We wish you much success in your future engagements. You are going to be very busy!”