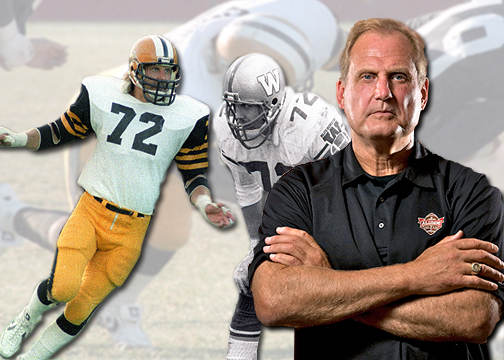 Known for his on-field determination and leadership skills, Leo Ezerins, spent 10 seasons in the CFL with the Winnipeg Blue Bombers and Hamilton Tiger-Cats. Leo, a graduate of Whitworth College in Spokane, Washington, was a CFL all-star and a key member of the Tiger-Cats 1986 Grey Cup Championship team.

During his outstanding college career, Leo was named a conference all-star four times and an NAIA All American.

After leaving his mark on the gridiron, Leo has also become an all-star off the field. As a community minded leader, Leo strongly believes in giving back. He has shared his 25 years of marketing and sales experience with many non-profit and volunteer organizations including Manitoba Special Olympics and the BC Chapter of the Juvenile Diabetes Foundation.

In 2008 Leo founded the CFL Alumni Association and currently serves as the executive director.

As executive director, Leo has been instrumental in raising over $200,000 for the CFL Alumni Support Fund, which was created to help former players who are experiencing financial limitations due to medical challenges.

He also developed a CFL Alumni Emergency Compassionate Fund which helps CFL Alumni who are experiencing an exceptional life challenges.

Leo has taken a very active role on the advisory board of the Canadian Concussion Centre and the clinical research team for the Canadian Sports Concussion Research Project.  The study is focusing on the long-term impact of repeated concussions of professional athletes and looks to build a brain bank for post mortem autopsy evaluation.

The former general manager of the 1991 Grey Cup Festival in Winnipeg, has transferred his on-field heroics and success to the business world. His corporate and volunteer accomplishments have made a positive difference in many lives.

Leo currently resides in Hamilton, ON and has two adult children, Katie and Dillon.