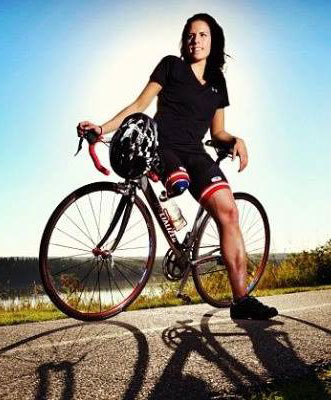 Michelle Salt was born and raised on a game farm outside of a small Alberta town called Calmar. From an early age, Michelle had a passion for sports. When she was 13, she fell in love with snowboarding and chased the dream of someday becoming a professional snowboarder. Though she never made it to the pro level, her love for the sport never died. In June, 2011, Michelle was out for an evening ride when she lost control of her Motorcycle. Upon impact, she broke several bones and severed her femoral artery causing her to almost bleed to death. She spend 7 days on life support, 5 months in the hospital recoverying and lost her right leg 10 inches above the knee. Though she knew she was going to have some tough times ahead of her, Michelle was determined to get back on snowboard and carve her way to the 2014 Sochi Paralympic Games. In March of 2014, Michelle made that dream a reality when she competed in the debut of snowboarding becoming the first ever Female Canadian Paralympic snowboarder.

Michelle loves to Wall Climb, Kayak, Cycle, Wakeboard, Camp, Work-out, Horseback Ride and Golf. She is also looking to qualify for X-games Adaptive Motocross, she walked the fitness stage again in November 2014 placing 9th out of 19 girls and is currrently making a push for the next Winter Paralympic Games in Pyeongchang South Korea.

Michelle is a Calgary based Realtor, a motivational speaker and a National para-snowboard athlete.