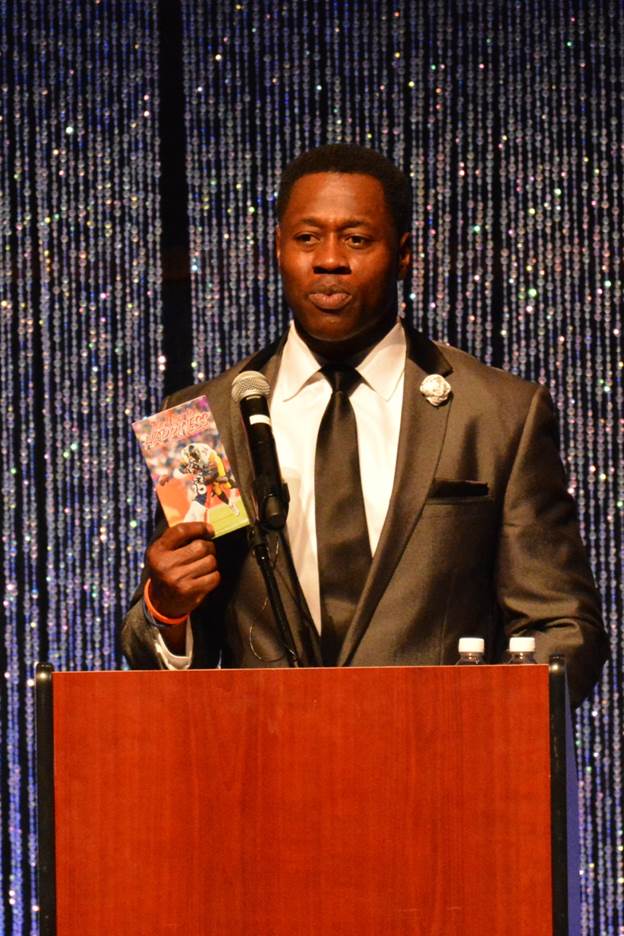 Growing up in the inner city of Miami has presented me with many obstacles to overcome. No matter how bleak things might have looked or what odds might have been stacked against me. One thing is for sure, I never stop fighting for what I want. I went from a college walk-on at Morris Brown College to a scholarship student-athlete at Georgia Tech, because it was imperative for me to display my athletic abilities on a larger platform.

This mind set has pushed me to chase my dream over 3 continents by way of the CFL, NFL Europe & finally the NFL. I took that same approach to my education when I decided to give up a 50 thousand dollar work-out bonus to return to Georgia Tech and earn my undergrad degree in Business. For my hard work and persistence I was presented with an award from the NFL because of my scholastic achievements. As an undrafted player in the NFL I’ve seen my fair share of highs and lows in my 10 year career and this has provided me with a keen sense of the inner workings in NFL.

The knowledge gained on & off the field has led to continued work as a Sports Analyst. The transition from a professional athlete, into sports broadcasting has allowed me to recreate the passion I had on the field as an analyst with determination providing a unique visual portrayal through the lens of an undrafted player finding success in the NFL. Maintaining the proper attitude with perseverance has allowed me to continue my pursuit for perfection as I embark on what is sure to be a great 2nd career.

“I recently had the pleasure of hearing Nick Ferguson speak at the inaugural Diamonds in the Rough awards gala honoring Rev. Leon Kelly. Ferguson, a former Denver Bronco, was there to introduce Rev. Kelly, and let the audience know how a book titled The Way to Happiness can impact a community. His message was clear and concise; the delivery, crisp and engaging. I was most impressed, however, with his professionalism. Ferguson had flown in only a few hours before the gala began, and he stayed on stage after his sound check to drill his speech over and over. He missed some of the pre-gala activities to ensure that he was spot on when it was his turn at the podium. I enjoyed working with him, and we hope to have him back for future events honoring Rev. Kelly and Open Door Youth Gang Alternatives.

“I have had the good fortune of covering Nick Ferguson in two professional leagues and have more recently worked with him on British television’s coverage of the NFL. During my time working with Nick on Sky Sports, I have found him to be an insightful, articulate and entertaining guest and I would recommend him to any broadcaster. When hosting a Sky Sports show from the Super Bowl Media Center recently, Nick was at the top of my guest list because he always offers analysis in a fun and very insightful way. He is a pleasure to work with and I hope we work together on many more projects in the future.”

“As the Sports Producer at KCNC-TV since 1999, I had the pleasure of covering Nick during his time with the Denver Broncos.

The athlete-media relationship can often be testy and awkward, but Nick was a true professional when dealing with reporters. It’s no wonder now that Nick has moved to the other side of that relationship that he maintains that professionalism. As he was as a player, Nick is one of the most prepared on-air analysts I’ve had the opportunity to work with.

Too often, former players simply show up believing they can wing it with the subject matter because of their own experience. Nick makes certain to know the subject matter. He studies the current events like he’s breaking down tape for a Sunday game. Of course, being prepared is only the first step to becoming a terrific on-air analyst. That preparation is useless unless the person can deliver it in a meaningful, cohesive and substantive style.

Here again, Nick knocks it out of the park. As a player, he was what we called a “great soundbite”. As an analyst, he’s stepped up his game.

If you want a former player who can go beyond just the X’s and O’s with personality, perspective and a terrific story-telling ability, Nick Ferguson should be on your radar”.