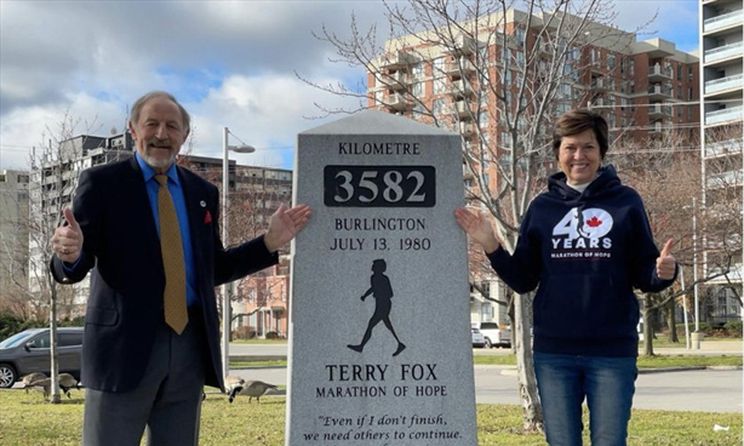 Canadian icon Terry Fox will soon appear on the $5 bill if a local football star and a local MP have their way.

Oakville North-Burlington MP Pam Damoff is sponsoring an e-petition initiated by Burlington resident and Canadian Football League Hall of Famer Tony Gabriel to have Fox featured on the back of the newly proposed $5 bill.

In 1980, after losing one leg to cancer, Fox embarked on the Marathon of Hope, a cross-Canada run to raise awareness and funds for cancer research.

Fox ran a marathon a day for 143 days before his cancer returned and he had to stop.

Gabriel, who played in the Canadian Football League from 1971 to 1981 for both the Hamilton Tiger Cats and the Ottawa Rough Riders, has very personal reasons for initiating the e-petition to honour Fox.

He says he lost his father to cancer at a young age.

His eldest brother, Joe, and his friend and mentor, David Gavsie, both died of pancreatic cancer.

Gabriel’s youngest son, Shane, was diagnosed with B-cell leukemia in 1990 at age 10.

He said he attributes Shane’s recovery to advancements in leading-edge cancer research and treatments.

The Canadian Hall of Famer said advancements in pancreatic cancer treatment also meant that his friend David was able to live for 16 months post-diagnosis, unlike Gabriel’s brother Joe who, a decade earlier, had died just six weeks after diagnosis.

“Terry Fox’s unselfish efforts were so inclusive in bringing renewed hope to all Canadians, regardless of background, gender or age,” said Gabriel.

“Terry stood tall and ran and hopped on that prosthetic leg for all Canadians, so that future generations of Canadians’ health would benefit. Terry’s legacy is that over $800 million has been raised to date, over 40 years, for Canadian cancer research in his name.”

Damoff is a longtime supporter of the Terry Fox Foundation.

In 2019, she secured $150 million from the federal government for the creation of the Marathon of Hope Cancer Centres Network.

She said the network unites cancer centres across Canada for the first time, accelerating the implementation of precision medicine so that Canadian cancer patients can assess the right treatment at the right time for their cancer, no matter where they live.

“I am thrilled to sponsor Tony’s e-petition to honour my hero, Terry Fox.,” said Damoff.

“Terry is one of the most recognizable Canadians in the world and has literally changed the face of cancer research and treatment here in Canada and internationally.”

Canadian citizens and residents can sign the petition before 4 p.m. Jan. 2 at https://petitions.ourcommons.ca/en/Petition/Details?Petition=e-3005.