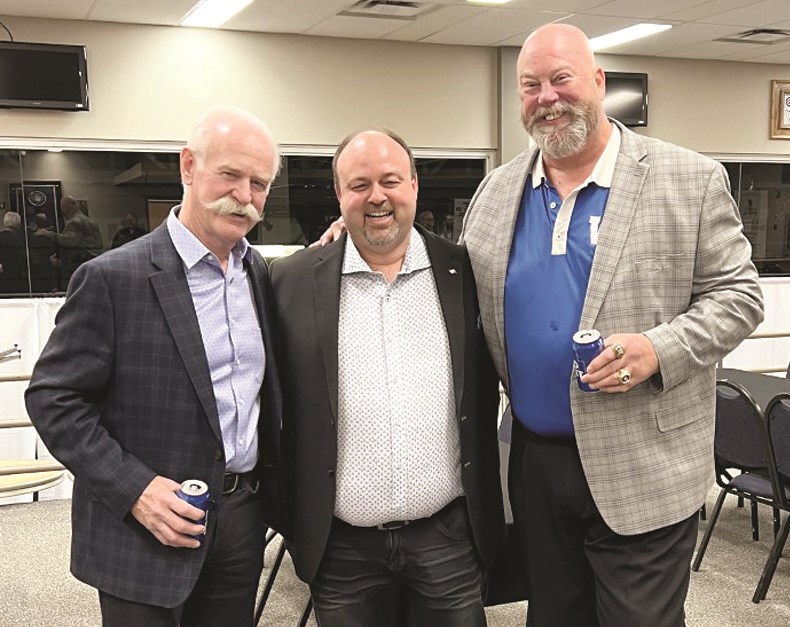 ASSINIBOIA – “Over $75,000 was brought in at our Sport Celebrity Auction,” said Curtis Nelson, president of the Civic Improvement Association. “Auctioneer Don Bushell did a tremendous job.” These funds will go towards completing the interior of the Southland Co-op Arena in Assiniboia.

The event held on at the Prince of Wales on April 9 auditorium saw 300 people attend. A prime-rib supper was followed by speakers, the live auction, and the Hot Stove questions and answers.

“All the celebrities spoke and told stories of their exploits as professional athletes and Rod Pedersen emceed the event. Lanny spent all his time jumping from table to table talking to everyone on the crowd after the program,” said Nelson.

Rod Pedersen, emcee, reflected on the evening: “Holy smokes was it fantastic to be in a jam-packed Prince of Wales Centre in Assiniboia for the town’s bi-annual Sports Celebrity Gala along with sports icons Lanny McDonald and Chris Walby. And man oh man, are they icons! I had the opportunity to host the Hot Stove panel but for one of the first times ever, I turned the mic over to the pair and sat in the crowd. Those two were on that much of a roll! I shot a glance to event organizer Curtis Nelson to see if it was okay, and the Nelson czar gave the approving nod. So I got to sit with my childhood buddies from Avonlea, Rouleau and briercrest and enjoy the show along with the sold-out house!”

The live auction included donations such as a gazebo, an auger spout, cases of Intruvix, tickets to Calgary Flames, Riders, Grey Cup, and Rush games, outdoor lounge set, compressor and nailer kit, photography, fresh food, as well as cash donations from their sponsors, and much more .

“I would like to thank all the volunteers that helped put on this event,” said Nelson. “Joanne Girardin and Elan Grondin for decorating the venue, the Junior B hockey team for running the bar, Marita Williams and Fresh start for the meal, and all our ticket sellers and auction spotters.

“I would also like to thank all the people who donated items, bought tickets to the event and bought auction items. Without their support we would not be able to put in such a successful function.”

“We are in the homestretch of construction for the new Southland Co-op Arena, so this fundraiser will help with any overhead costs,” said Curtis Nelson, president of the Assiniboia Civic Improvement Association.

Construction on the new Southland Co-op Arena is expected to be finished near the end of August. Nelson reported that finishing construction work (like drywalling) is being completed.

Recently, a few members of the Assiniboia Civic Improvement Association had a walk through of the construction site, and were able to feature a video walkthrough during the Sports Celebrity Gala.

“We are very excited for the future of using the new Southland Co-op Arena,” said Nelson. “It will be a first-rate facility, especially for a rural community.”

“We are the first town in Saskatchewan to have an arena like this. We are hoping to close that end of the street off and to build a walkway/plaza expansion between the Centre and the Prince of Wales,” said Nelson. “It’s fairly expensive, though, and would take another half million.”

Residents are reminded that tickets are still available for the Spring Lotto, the other main fundraiser for the Assiniboia Civic Centre Association.

The quickest sell out for the Spring Fever Lotto was 2021 and this year is on pace to be a close second. “Our final draw is May 29,” said Nelson.

The Spring Fever Lotto features over $248,000 in prizes. The winning grand prize is $150,000 cash or winners can choose from a plane, a truck and fifth wheel package or three different agricultural packages from New Holland, Case IH or John Deere, in addition to several other prizes.

This article was posted by Assiniboia Times.
VIA: https://www.sasktoday.ca/south/local-news/phenomenal-speakers-highlight-sports-celebrity-gala-5259625