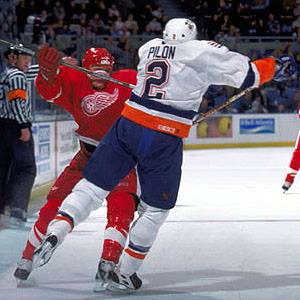 Rich was one of only two players ever selected in the NHL Entry Draft out of Midget AAA hockey and was selected in the 7th round by the New York Islanders. He played his Junior Hockey career with the WHL Prince Albert Raiders. In his two years with the Raiders Rich received the Best Defenseman award as well as being selected to the first WHL All Star team in 1988. Rich joined the Islanders for the 1988-89 season as a regular on the blue line and played there for the majority of his career. It was during this time that he earned his nickname, “Chief”, a nod to his Metis heritage. Rich received the Bobby Nystrom Award in 1997 recognizing his leadership, hustle and determination. After 11 ½ seasons on Long Island Rich moved to the New York Rangers and after the 2001 season signed as a free agent with the St. Louis Blues where he suffered a career ending injury.

Since his retirement in 2003, Rich has focused on coaching and developing young players from the Initiation to Midget AAA level, including a two year stint as a defensive coach advisor to the WHL Saskatoon Blades. Rich has personal experience with the hard work, effort and sacrifice required to move up the levels of hockey to its peak, the NHL. Rich has a partnership with Cameco in providing a life lesson program to northern communities in Saskatchewan called “Dream and Believe”. This gives Rich the opportunity to share first-hand how he overcame some of the same obstacles that many of us may be currently facing and how he has achieved his own impossible dream.

Rich recently achieved his High Performance Level 1 Certified Coach through Hockey Canada. He is currently an Assistant Coach with the Midget AAA Saskatoon Contacts and an Assistant Coach for the 2015 Team Saskatchewan U16 squad.

Rich has a wealth of stories, some of them even about hockey, that he enjoys sharing with others.