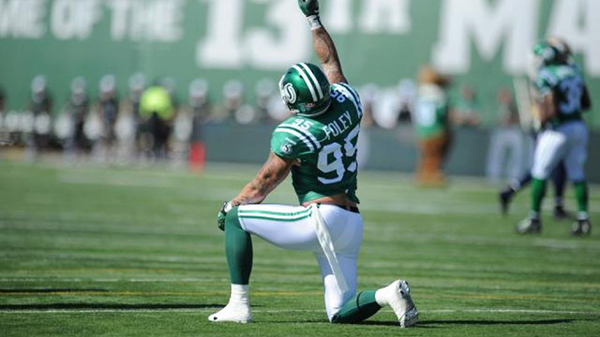 Ricky Foley was born in Courtice, Ontario and began his football career with York University (2003-2005) where he was named Second-Team CIS All Canadian in 2004 and First-Team All OUA in 2004/2005.

In 2006 Ricky attended the CFL Evaluation Camp and was selected in the 1st Round (4th overall) in the CFL Draft. He then signed with the Baltimore Ravens (NFL) and attended workouts before being released and attending training camp with the B.C. Lions.

Foley played 16 games at backup DE for the Lions and dressed in the Western Final win over the Saskatchewan Roughriders as well as in the 2006 Grey Cup win over Montreal where he recorded 2 DT and 2 ST tackles. In 2007 Foley dressed in 18 games at backup DE for the B.C. Lions while seeing increased time as a part of the defence and playing special teams. In 2008 he dressed at backup DE playing in 18 games for B.C. earning regular time with the defence and on special teams making 7 DTs, 16 ST tackles, 4 QB sacks, 1 FR for 30 yards, 4 forced fumbles, 1PKD and scoring 1 special teams TD (the first of his career). Ricky started in all 18 games at DE for B.C. in 2009 and was named B.C. Lions’ Most Outstanding Canadian, West Division Most Outstanding Canadian and CFL Most Outstanding Canadian. He recorded 51 defensive tackles, two tackles on special teams, a fumble recovery and a career high 12 sacks. In the 2009 playoffs Foley started the East Semi-Final and the East Final combining for 8 DTs, 1 PKD, 1 FF and 2 QB sacks in the two playoff games.

2010 brought Free Agency and Ricky signed with the Seattle Seahawks (NFL) where he attended training camp but was released as a final cut in August. He was claimed off waivers by the New York Jets (NFL) and added to the practice squad but then released in September when he then signed with the Toronto Argonauts and made his debut dressing at backup DE. Foley recorded his first sack as an Argo during his first play on defence, also added three defensive tackles by Week 14 and made his first career start as an Argo at DE in Week 16. He completed the year as starting DE in the Eastern Semi-Final win and the Eastern Final loss to Montreal recording 6 defensive tackles, one special team tackle, a sack and a blocked field goal. Foley dressed and started in all 18 regular season games with Toronto in 2011. He was named the Argo’s Most Outstanding Canadian. In 2012, Foley played in the 100th Grey Cup for the Argonauts who went on to win the Grey Cup championship. After the Grey Cup, Foley was award3ed the Dick Suderman Trophy as its “Most Valuable Canadian” player. Entering 2013 Ricky was listed as one of the top free agents available to be signed.

He was signed by the Saskatchewan Roughriders in February of 2013. In his first season with the Riders, Foley accumulated 45 tackles and 8 quarterback sacks. He also had a career high 4 fumble recoveries. Foley was a part of the 2013 Grey Cup, winning his third career Grey Cup. Ricky continued his strong play in 2014, tallying 54 tackles and 12 sacks. He was named the Saskatchewan Roughriders’ Most Outstanding Canadian for the 2014 season. Following the season, Foley signed a contract extension with the Riders organization but was traded in January of 2015 to the Toronto Argonauts. In this his 10th season in the CFL, Foley played in 16 games collecting 48 tackles – 6 quarterback sacks and 1 forced fumble. In December 2015 Foley resigned with the Argos for the 2016 season.

Ricky is an active member of the Argo’s Huddle Up Bullying Prevention Program. He enjoys spending time on his family farm and credits the work ethic and toughness, taught to him by his parents, as well as his Christian faith as the biggest reasons for his success.