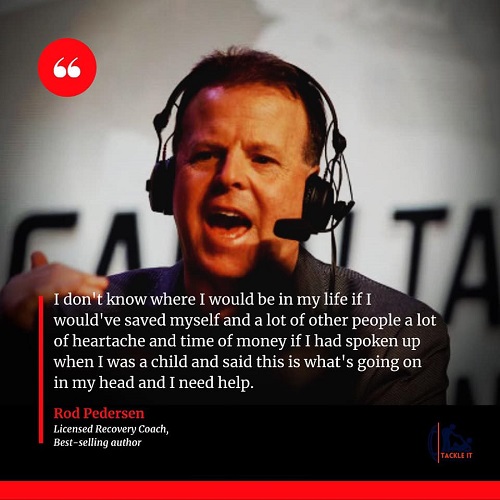 In episode 26 of telling their stories, Hall of Fame broadcaster, Rod Pedersen, founded Pedersen Recovery Inc. where he serves as a Sober Coach for athletes and entertainers battling Addictions & Mental Illness, and is an outspoken Recovery Advocate serving as a keynote speaker.

Previously, he spent 20 seasons as Voice of the CFL’s Saskatchewan Roughriders on CKRM Radio.

Among his accomplishments are calling four Grey Cups on national radio and the 2012 World Junior Hockey Championships on the Sportsnet Radio Network.

Rod’s career includes 17 years as a play-by-play broadcaster in the Western Hockey League (1993-95 Prince Albert Raiders, 1995-2010 Regina Pats), making him the longest tenured play-by-play man in Regina Pats history.  He has also called games for the Great Falls Americans of the AFHL.

Rod has had stints on network television with Rogers Sportsnet and The Score as a regional correspondent.

He’s also a best-selling author and his website RodPedersen.com has twice been voted Canada’s Sports Blog of the Year, with over 25-million all-time hits.

In 2003, he was inducted into Saskatchewan’s Rural Sports Hall of Fame.