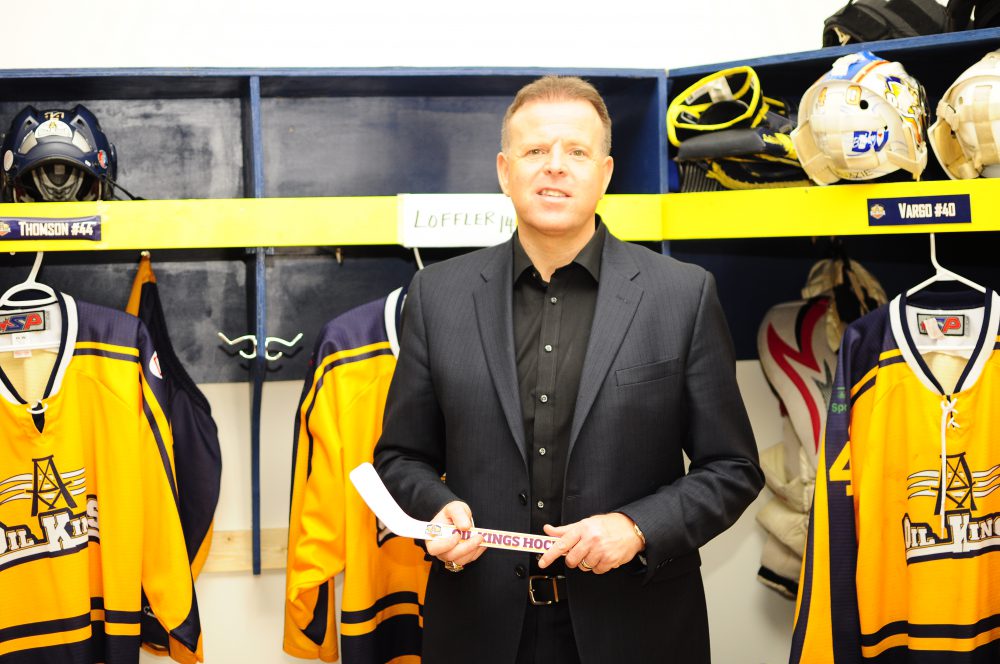 Among Rod’s accomplishments in a distinguished broadcaster career are calling four Grey Cups on national radio and World Junior Hockey Championships on the Sportsnet Radio Network.

Rod’s career includes 17 years as a play-by-play broadcaster in the Western Hockey League (1993-95 Prince Albert Raiders, 1995-2010 Regina Pats), making him the longest tenured play-by-play man in Regina Pats history.  He has also called games for the Great Falls Americans of the AFHL.

The Milestone, SK product has had stints on network television with Rogers Sportsnet and The Score as a regional correspondent. Rod is also a best-selling author and his website RodPedersen.com has twice been voted Canada’s Sports Blog of the Year, with over 30-million all-time hits.

In 2003 Rod was inducted into Saskatchewan’s Rural Sports Hall of Fame.

Most recently Rod founded Pedersen Recovery Inc. where he serves as a Sober Coach for athletes and entertainers battling Addictions & Mental Illness, and is an outspoken Recovery Advocate serving as a keynote speaker.

“Rod presented his story to our students in a very open manner.  His story one of honesty, highs and lows, but is also one of positive change and perseverance.  His message of being open and caring for one another resonated for our students and staff alike”.

“Rod’s presentation was spot on! He spoke to over 300 people in two presentations. His rawness, humor, authenticity CONNECTED. What hit me is his believability in telling his story of recovery, and honesty about mental health issues. I lost track of how many people said we should bring him back.”

“Rod’s presentation was excellent in bringing home awareness to a rural community with respect to mental health. His ability to portray mental health like a disease and not a stigma helped greatly with people better understanding how it may effect family and friends.”

“We can’t thank EMJ and Rod Pedersen enough for their contributions to our inaugural sports dinner and auction. As a new committee throwing its first major event of any kind, we really appreciated the ease and efficiency with which EMJ looked after our arrangements, and even more so the wit, presence and professionalism Rod brought to our event. Rod had the entire room at ease within seconds of taking the stage, and kept the night flowing smoothly. It felt like he knew half the room, and he interacted with them accordingly. Rod also went way above and beyond what was asked of him by making a very generous offer that contributed greatly to our live auction proceeds. He even shared a handful of Roughriders related stories throughout the night despite only being booked as MC and not as a keynote speaker. We would not hesitate to work with EMJ again in the future, and Rod is welcome in our community any time.

“We were very happy with Rod and his presentation and have received a lot of positive feedback from those that were in attendance. Rod`s direct and honest approach with his story was appreciated by the employees. He fielded a lot of questions after the presentation (and not one of them related to the Saskatchewan Roughriders!) so that was a good sign that employees were listening. I`m hopeful that his openness and candour about his own addictions and mental illnesses will help break the stigma about talking about addictions and mental health in general at our plant.”

“Rod was excellent as the Emcee of our event on March 19th , he just took control of the day , starting by announcing the goals at the initiation hockey game , signing 120 mini sticks and just generally associating with people at the rink. The Evening we introduced Rod and he just took it from there, we were counting on him to keep things rolling smoothly and he did just that, thanks Rod for doing a great job.”

“We were fortunate to have Rod Pedersen as our emcee. He was very well prepared and was able to keep our evening moving very smoothly. He was a consumate professional.”

“Another very successful event with Rod Pedersen at the helm as MC. Rod is the consummate professional. He respects the tone of the event as established by the host committee, keeps the event on time, and makes everyone at ease with his knowledge of the Saskatchewan sport community. We are looking forward to the next opportunity when we can work with Rod.”