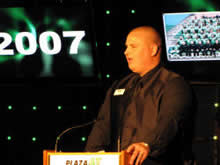 As he did on the football field, Scott Schultz brings a very high energy performance that will inspire, motivate, educate and entertain your audience.

During his presentations, Scott will add humor when delivering key messages that focus on leadership, teamwork and peak performance.

You will also appreciate how Scott’s energetic delivery and lively anecdotes from the locker room add to the uniquely tailored speech for your organization.

For the sports enthusiast, you will hear comical gridiron tales from Scott’s career.  From the University of North Dakota, to the NFL, back to Saskatchewan to play for his favorite childhood CFL team, Scott openly shares his life lessons

The former first overall draft pick in the 2001 CFL College Draft, Scott had 178 career tackles and 41 quarterback sacks during his CFL career. During his time in the CFL, Scott never missed a game due to injury. He was also the starting defensive tackle on the Saskatchewan Roughriders 2007 Grey Cup championship team. In August 2009, Scott retired to become the president of a local Insurance company.

Scott and his wife Rosaline and family make White City their year-round home.

A 2005 CFL All-Star, Scott’s outgoing personality and sense of humor made him an instant favourite among his teammates and he’ll be a star at your next event.

“We had Scott Schultz speak as the keynote at our annual fundraising banquet for our 9-man football team in Fort Qu’Appelle. Scott in a word was amazing. It was a true privilege to listen to somebody from Saskatchewan speak about succeeding as an individual in Saskatchewan. Scott brought the perfect combination of humour, inspiration, and advice for my forty players. Parents, players, our principal, and my coaching staff all thoroughly enjoyed Scott and his words of wisdom. I thoroughly recommend Scott as a speaker at any sports venue – he knows what it takes to be a successful individual in Saskatchewan, he lives his talk, and he is a delight to listen too!”

“Scott was great with Kids at the rink, signing mini sticks , talking to the hockey teams on and off the ice showing off his grey cup ring. At the hall he socialized with everyone , held babies that wouldn’t go to sleep for their parents. One person said to me we hired two comedians to speak at our Oil Mens bonspiel and Scott was far funnier than either one of them, he pretty much had the crowd in his hand.”

“Scott Schultz was wonderful to have keynote our conference. His personal stories, football memories and ability to motivate our teachers by speaking about his previous school experiences and the influences they had on him was spectacular. We look forward to having another opportunity of having a speaker like him at future conferences.”

“We had our Second Annual Sports Gala in Zenon Park this spring (2012) and once again it was a big success. Special thanks to Joe Gunnis of EMJ Marketing for all of the help in once again getting us some top notch talent and for coming to our event. Scott Schultz and Weston Dressler were a big hit with the kids as they generously agreed to take part in an autograph session prior to the dinner; Weston was a big hit with the ladies too! Both men were hilarious and had great tales to tell. Mr. Schultz is pretty smooth for a big man. And who knew that Elton John would factor into the evening? Michael Ball did a fantastic job as emcee and helped keep the evening moving along smoothly, even if the Big Deal Mobile didn’t move so smoothly.

I highly recommend contacting Joe from EMJ Marketing if you are looking to get a good speaker for your event. He will do whatever he can to make your event a success.”