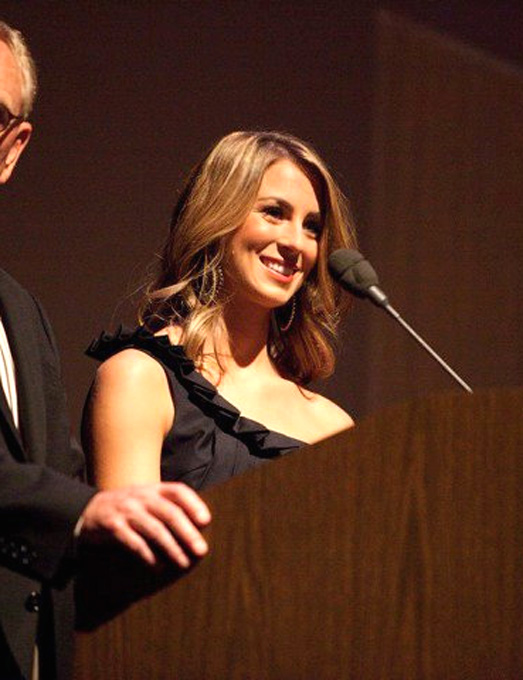 Tenley (Molzahn) Leopold is best known to television audiences as America’s Sweetheart from ABC’s The Bachelor, Bachelor Pad and Bachelor in Paradise. She is the epitome of the positive image, beautiful inside and out. As a former professional dancer, Tenley chooses to continue with a healthy, active lifestyle with running, yoga, pilates and paddle boarding. She encourages others to get and stay active. She is passionate about people that have similar, positive thoughts on giving back and making a meaningful difference in the lives of others. She is a Certified Health Coach, in Nutrition and Wellness, with a focus on digestive and gastrointestinal issues, that will help her promote the Gluten Free lifestyle and her website, https://www.tenleyleopold.com/.

Tenley is a dreamer whose parents always encouraged her to follow her heart, Tenley excelled in dance and theater from an early age, independent from the get-go. “I always knew that God had put it in my heart to be a performer, and there was no doubt that I would follow my heart.”

In 2002, she did just that. Right after high school graduation, Tenley moved to Los Angeles to audition for Walt Disney Productions, hoping to parlay all her years of dance into a career. Among over 700 hopefuls at the open audition, Tenley earned the part. Her dream of becoming a performer had become reality.

For the next six years, Tenley danced and performed in Disney productions all over the world, taking the lead role of ‘Ariel’ in Tokyo Disney’s amazing ‘Under the Sea’ tour. The role was demanding—even requiring aerialist work, hanging from 80 feet above the audience—and physically grueling, but Tenley learned valuable lessons… about work and about life. “I was 21 when I went to Tokyo, and it was a real time of personal and professional growth for me,” she says, “learning how to work with a wide variety of people, figuring out how not to get lost in it. I had ribs come out of place, really struggled with exhaustion, but it taught me the importance of a strong work ethic and how to keep going when the show must go on. And it opened up more doors for me to just keep dreaming.”

When Tenley returned to the U.S., her plan was to attend college and continue pursuing her passion for dance. But love, as it often does, got in the way. She got a job, bought a house and married the man of her dreams only to have those dreams dashed by his infidelity. They divorced a year later, leaving Tenley brokenhearted.

But sometimes, clarity trips in through what’s broken, teaching you something new, even what’s been inside you all along.

“In that moment you feel your life is over, when all my ability to trust was broken, people came around me and built me up,” Tenley says. “And as I learned to let people love me, I learned that life wasn’t out to get me. I remembered what a gift it is. I remembered who I was: a faithful and loyal person, with great capacity to love. That I can be a warrior, a fighter, and that I can handle whatever comes my way.”

And that was when ABC’s runaway hit show “The Bachelor” came in and changed her life yet again. Friends and family begged her to audition, and when Tenley hedged, they literally pulled her out of bed and drove her to the studio. She thought it was a big joke.

Turned out the joke really was on her. Not only was she cast among thousands of hopefuls in line for the heart of Jake Pavelka, the bachelor, when the show aired in January 2010, Tenley’s authenticity and kindness won favor with fans all over the country. She was the frontrunner all season long, up until the finale when Tenley became the runner up. She was content with the result. “Ultimately, ‘The Bachelor’ was one of the greatest experiences of my life,” she says in retrospect. “I knew my heart could be broken again, going into it, but I knew that if this man was supposed to be in my life, he would be, and that if I wasn’t going to be his choice in the end, it was meant to be that way. So I was at peace, either way.”

Throughout the summer following “The Bachelor,” Tenley began correspondent work with E! News’ D10 show, and then came her next opportunity with ABC’s “The Bachelor Pad,” where past contestants on “The Bachelor” and “The Bachelorette” competed for $250,000. Tenley was once again the runner – up, with long time friend and fellow Bachelor Pad contestant Kiptyn Locke.. Since the season finale Tenley has continued to work with E!, interviewing Dancing with the Stars contestants Audrina Partridge and Jennifer Grey, and hosting a variety of other red carpet events. She has been seen in various campaigns for brands such as GAP, Brooks Running and BH Cosmetics.

For Tenley, now working with several non-profits devoted to making a positive difference, “The Bachelor”, “Bachelor Pad” and “Bachelor in Paradise” opened her eyes to new possibilities and reawakened her dream of being an entertainer. “That desire, that passion to express myself through the arts, has always been inside me. That’s where my heart is—to share my story and my gifts, to be a voice of hope and love. To shine a little light into a dark world.”